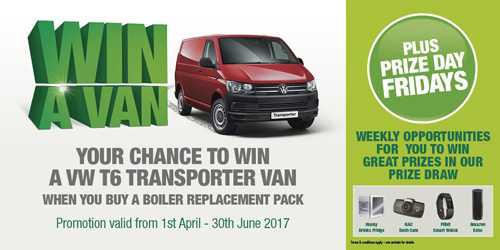 Every purchase of a Boiler Replacement Pack will be entered into a prize draw where the lucky winner will receive a new VW T6 Transporter in the colour of their choice.

Customers will also be entered into a weekly prize draw for every pack purchased, where they stand the chance of winning a range of other prizes. These include a Husky drinks fridge, an RAC Dash Cam, a Fitbit smart watch, and an Amazon Echo.

Graham’s Win a Van promotion is open until June 30, 2017 in Graham branches nationwide. For more information and T&C’s visit your local branch or go online to: http://www.grahamplumbersmerchant.co.uk/legal-information/win-a-van-2017/.