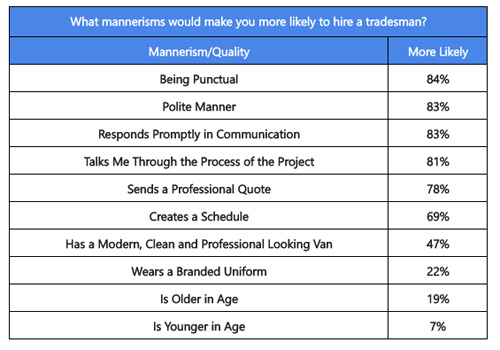 The key to getting hired is punctuality, says survey

Plentific.com’s latest survey has revealed that punctuality is the most desirable quality homeowners look for when hiring tradesmen.

Having a polite manner and responding promptly in communication also have a positive influence according to 83% of homeowners. At third place, 81% feel that they are more likely to hire a tradesman who can talk them through the process of their project.

Communication and organisation appear to dominate the top of the table, which shows how much homeowners value professionalism when hiring tradesmen. This is further emphasised by the qualities that follow on the list. 78% are more likely to hire a tradesman if they send through a professional quote, while 69% are more likely to choose a tradesman if they create a solid schedule.

The qualities ranking bottom of the list suggest that appearances have less of an impact on a homeowner’s choices. Having a modern, clean and professional looking van only makes 47% of homeowners more likely to hire a tradesman, while wearing a branded uniform only influences 22%. Sitting at the bottom of the table, a tradesman’s age has the lowest impact on the homeowner’s likelihood of hiring, regardless of whether they are older (19%) or younger (seven per cent).

Looking at the results by location, a tradesman’s punctuality has the highest influence in Sheffield and Edinburgh, with 91% of local respondents admitting they were more likely to hire a tradesman with this quality.

London displays similar preferences to the national average. Punctuality, talking through the process of a job, and responding promptly in communication all share the top spot with 83% of respondents calling them the most desirable qualities for a tradesman to have. However, being polite falls slightly in the rankings, as only 81% would be more likely to hire a pro with this quality. The similarity between local results suggests that location has little impact on a homeowner’s preferences when hiring tradesmen.

Spokesperson for Plentific, Stephen Jury, said: “While all of these qualities can help a tradesman get hired, it is clear from our findings that appearances make less of an impact on a homeowner’s decisions.

“Organisation is key: arriving on time, being prompt in communication and generally having a polite and positive manner will make potential clients more likely to hire a tradesman.

“To improve the odds of hiring, tradesmen should focus more on their schedule, process and attitude before spending their well-earned money on appearances.”