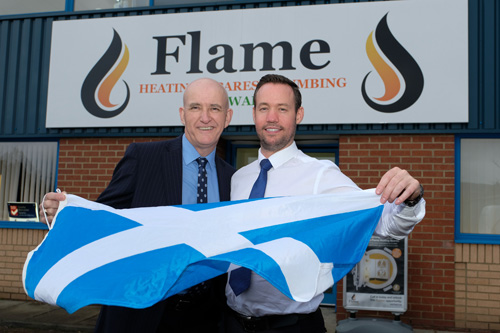 Flame Heating Spares is targeting further growth and job creation, as it looks to expand its operation to serve the Scottish market.

Flame currently operates throughout the north east of England from seven branches, but is now looking to launch branches north of the border in Scotland’s major towns and cities. This includes Edinburgh, Glasgow, Aberdeen, Perth and Dundee.

The company appointed Danny Byrne at the start of the year to oversee the expansion and Flame is actively working to acquire a number of sites and develop its brand across Scotland, with the potential to create up to 25 jobs.

As part of its recruitment plans, Flame will create a number of directorship roles in addition to branch managers and supervisors, who will be located at the branches. The directors of the branch will be incorporated into the company’s investor director model, owning a percentage stake in the branch.

Danny Byrne, development director for Scotland, said: “We are a couple of months into this latest venture which has the potential to vastly increase Flame’s presence in the UK and allow us to enter new markets.

“The model has been a great success in the North East of England and we are now looking to replicate this in Scotland.”

John Savage, managing director, added: “We are looking to increase our presence throughout the North and Scotland, which will set the company up perfectly for further growth and job creation.

“Danny has done a great deal since he joined Flame and we are now pressing on with this ambitious expansion plan, and I am hoping to build on the success we have enjoyed in the North East of England.”