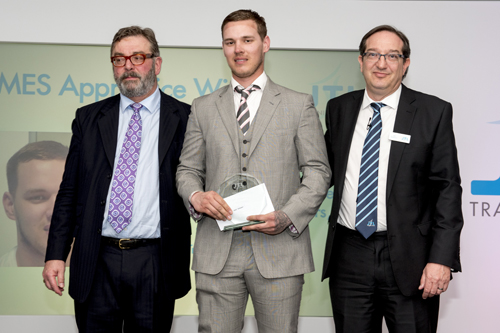 The award scheme celebrates the highest achieving young trainees in the building services engineering sector, with candidates nominated from each of JTL’s regions across England and Wales.
Finalists are selected following a rigorous regional selection process, on the basis of their outstanding overall performances.

The Best Plumbing Apprentice of the Year was George Steel, from Clacton-on Sea, Essex.

George said: “I’m over the moon! It’s just unbelievable to have won my category. Four years ago I was shy and quiet but now I’m completely different – I love meeting people and I’ve got the confidence to go into different people’s homes. It’s thanks to JTL and my apprenticeship that I’ve become the person I am today. I literally don’t think I’d be where I am today without it.”

Mum, Lisa added: “George has grown up so much while he’s been doing his apprenticeship. It’s given him a direction and he’s now got a great skill set to work with. He’s severely dyslexic and had only previously encountered negativity, even at school. The apprenticeship offered him a solution and he’s worked hard all along, even seeing a tutor to help him get one step ahead with the college work, so he really deserves this success.”

George did some work experience with local company, Home Heating Essex while he was still at school. It was so impressed with his work ethic and practical abilities that it offered him a part time job and the opportunity as an apprentice on a JTL training scheme. In the long term, George would like to set up his own business.

Mark Brown, George’s training officer at JTL, highlighted George’s commitment and determination to succeed, both at Colchester Institute and in the workplace.

Jon Graham, JTL’s chief executive, said: “We have recognised and celebrated some brilliant young talent at our awards ceremony. It’s been a pleasure and an inspiration getting to know our 12 finalists as part of this process.

“Without exception, they are bright young people who have made a specific choice to follow a building services engineering apprenticeship. They all have their heads screwed on – they’re mature and knowledgeable and they’ve chosen to learn a life-long skill while earning a living and supporting themselves at the same time. For that alone, they must be commended. Each has followed a rigorous four-year course (that’s longer than most degrees) and shown the determination to succeed.”

Specialising in electrical and plumbing apprenticeships, JTL has trained 35,000 apprentices to date. This year’s finalists were chosen from a 6,500 strong cohort.