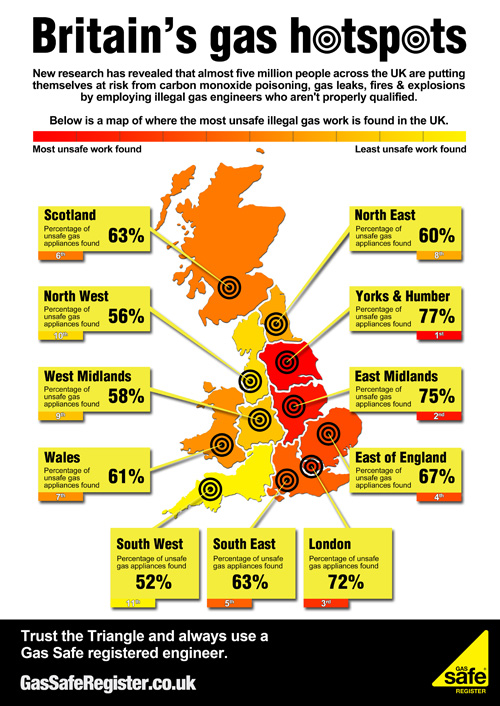 New research has revealed that almost five million people across the UK are putting themselves at risk from carbon monoxide poisoning, gas leaks, fires and explosions by employing illegal gas engineers who aren’t properly qualified.

Gas Safe Register found that nearly one in five people who employed a tradesperson to work on a gas appliance did not check their ID card or qualifications.

This comes as Gas Safe Register releases four years’ worth of data from its investigations team, which searches out unqualified and unregistered gas fitters across the UK. The team found that a worrying 65% of gas jobs carried out by illegal fitters were unsafe and one in five gas appliances were so dangerous that they had to be disconnected immediately.

The study found that people are most likely to employ a tradesperson based on recommendations from friends or family members (53%), and trust them based on their personal presentation (41%) or how official they look (30%), rather than on their qualifications (11%).

Jonathan Samuel, chief executive of Gas Safe Register, said: “Our investigation team’s data shows how dangerous it is to let unregistered gas fitters carry out work in your home. We are therefore calling on people to ‘trust the triangle’ by checking for the Gas Safe Register logo on gas fitters’ ID cards, and help keep their families safe by only employing registered engineers who are qualified to work on the appliance in question.”

Gas Safe Register’s investigations team has inspected over 2,300 illegal gas jobs over the past four years. Significant disparity between different regions and cities across the country can be found when it comes to the number of dangerous gas jobs carried out by illegal fitters.

For example, 51% of jobs in the south east were found to be unsafe, compared to 78% in Yorkshire and Humber, including 96% of jobs investigated in Leeds.