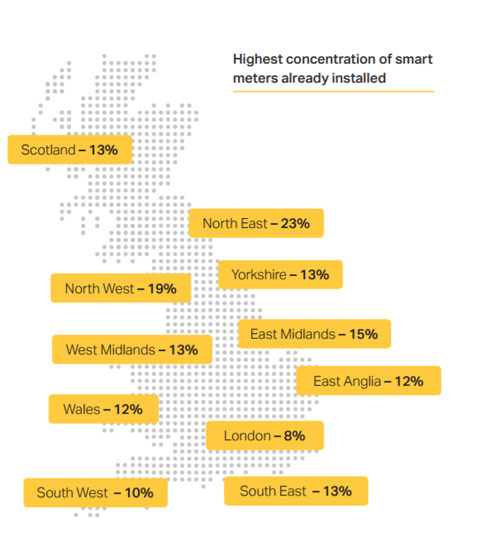 A map shows where the smart meters have been installed so far.

An emerging north/south divide could derail the governmentâ??s plan to install smart meters in 50 million homes by the end of the decade, new research suggests.

However, a lack of commitment among homeowners in the south, particularly in London where just eight per cent of homes have a meter installed, means the government could potentially miss its ambitious installation target.

With just three years left until the self-imposed deadline, the report by ECTA Training shows the scale of the task facing the government, and the wider energy industry, as official figures show only 4.9 million smart meters have been installed to date.

The report, â??Smart Meters: The consumer viewâ??, found that just ten per cent of homes in the south west and 13% in the south east already have a smart meter.

The findings also suggest more needs to be done to educate homeowners about the benefits of smart meters, with 44% of consumers admitting they donâ??t know why they could be good for their energy bills.

Dave Berry, director at ECTA Training, said: â??With the government less than ten per cent of the way towards its smart meter installation target, more needs to be done to educate homeowners to their benefits, particularly in areas of low uptake.

â??In the north west, and wider northern region, we have seen a significant rise in the installation of smart meters as consumers become more aware of the benefits and potential savings they can offer. But this information is not getting through south of the border and it now poses a serious threat to the plan to get 50 million meters installed by 2020.â?