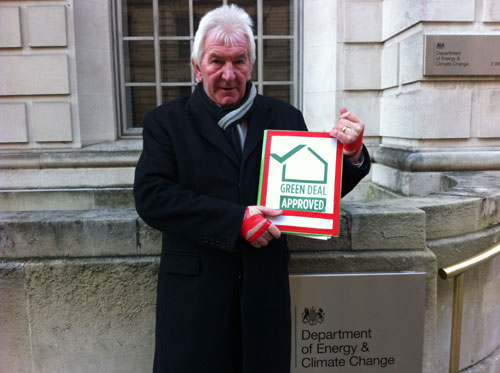 Two years on from announcing his â??uncouplingâ?? from the failed Green Deal, energy efficiency campaigner, Peter Thom, has written to the Prime Minister to express his serious concerns over the recommendations made in the recently published â??Each Home Countsâ?? Bonfield Review.

In an open letter to Theresa May, Green Heatâ??s founder and managing director expresses his frustration that the recommendations made in the Review put yet more barriers in the way of progress in enabling more people to live in energy efficient homes.

â??Peter Bonfieldâ??s Review shows that little has been learnt from the failure of previous initiatives,â? said Peter. â??The valuable experience, advice and knowledge from those who have tried to make these schemes work and who are on the â??front lineâ?? with consumers to help them, for example, heating engineers, has not been considered.

â??Following the disastrous failure of the Green Deal, which I highlighted in an open letter to David Cameron two years ago, explaining in detail why heating installers did not engage with this government scheme, I was somewhat surprised that following 200 meetings with 170 stakeholders and a further 410 organisations, the Bonfield Review is suggesting more of the same by retaining all these barriers. Clearly, the installersâ?? view is not being listened to and they were probably not well represented at these meetings.

â??The original Green Deal scheme was going to be open to all Gas-Safe registered installers, without the need for the added costs of PAS2030 for management systems, additional accreditation, inspections and surveillance. This was agreed with industry, as we are already highly regulated with a requirement to undertake costly training and examination every five years to maintain gas accreditation.

â??The Green Deal cost taxpayers Â£240 million, including grants to stimulate demand. However, this figure does not take into account the enormous costs in both time and money to the heating industry in undertaking training and accreditation certification, which was completely wasted and unrecoverable. Inevitably, smaller installer businesses were hit hardest.â?

Peter is now urging the Prime Minister to recommend a working party of professional heating engineers and installers to work with policy-makers to look at ways in which industry and the government can collaborate to improve the efficiency of UK housing stock. This has worked well in the past, resulting in the introduction of successful energy efficiency measures.