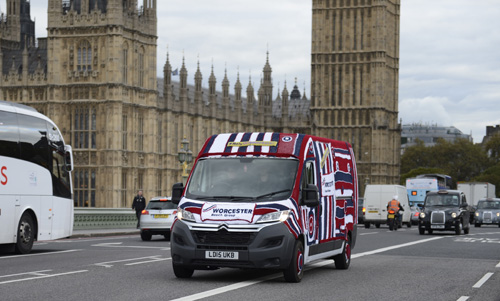 Worcester takes to the streets in a knitted van

Worcester, Bosch Group, has taken to the streets with a new advertising campaign, driving around the UK in a giant knitted van to remind homeowners that they can #RelyOnWorcester to keep warm this winter.

Starting with the nation’s capital, the manufacturer took its woolly van around the city armed with hand-warmers, hot drinks and bacon sandwiches to warm up the morning commuters and find out who or what it is they rely on.

Having launched a social media search to find an installer to be the ‘face of the trade’, the team was also joined on the road by Peter Booth, of GV Booth Plumbing and Heating, in Loughborough. Peter told the camera what he relies on in his day-to-day role as a heating engineer.

After a day of filming, it was back on the road again, with the van making its way north to visit other landmarks around the country.

The manufacturer will be supporting the activity with another nationwide TV and social media advertising campaign, which aired on Channel 4 at 8:42 pm on November 4.

You can watch the results of the tour by searching #RelyOnWorcester on social media, or by visiting: www.worcester-bosch.co.uk.