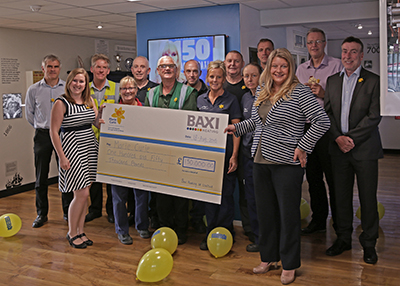 As part of its 150th anniversary celebrations, Baxi has raised £150,000 for its national charity partner, Marie Curie.

With the company not yet at the end of its year-long fundraising stint, staff have already sprinted, baked, gamed and climbed their way to hitting their goal for the charity, which will help to fund 7,500 hours of care and guidance for those living with terminal illnesses and their families.

Marie Curie has been Baxi’s charity partner for the past three years, and colleagues have gone the extra mile to show support for the work it does and the much-needed help it provides. Fundraising events have included a sponsored walk across Hadrian’s Wall, a night time cycle ride around London, a Mud Run, a 75-mile cycle ride around the Lake District, a 24-hour computer gaming session, a Baxi Great British Bake Off, and a Diwali Indian food sale.

Earlier in 2016, Baxi’s fundraising was given a substantial boost through money raised by colleagues running the London Marathon. Two members of the Baxi team, Paddy Fletcher and Tom Hampton, HR managers at the Warwick and Preston sites respectively, raised almost £6,200, bringing the team much closer to its overall target.

David Pinder, CEO, said: “We can’t think of a better way of celebrating our 150th anniversary than by giving a gift of £150,000 to such a hugely deserving cause. We may have reached the target we set out to achieve, but our efforts don’t stop here – there are plenty more fun activities planned for the remainder of the year to support Marie Curie and help it to continue with its incredible work. We’re proud to support such a fantastic cause.”