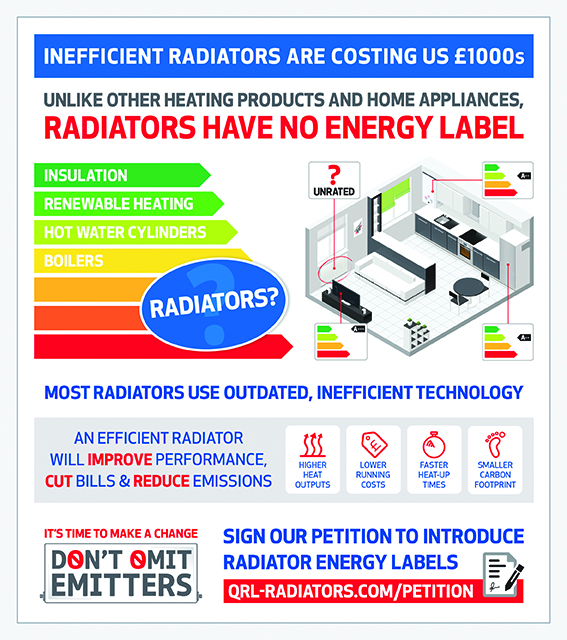 British manufacturer, QRL Radiator Group, has launched a campaign for the introduction of an energy labelling system for radiators – similar to the one used for boilers, renewables, hot water cylinders and other household essentials.

Launched on August 23, QRL’s ‘Don’t Omit Emitters’ campaign calls for the industry to come together and petition the government to include radiators in mandatory efficiency ratings. Radiators are not currently covered by the EU’s ErP (Energy-related Products) Directive and its colour-coded energy labelling system, with efficiency bandings rated A+++ to G. This means there is no requirement for manufacturers to produce an energy label for radiators, or for installers to include radiators when producing the package label indicating whole-system efficiency.

David Kerr, CEO at QRL Radiator Group, said: “At a time when everyone connected with the heating industry – from the government right through to manufacturers and installers – is putting efficiency at the top of the agenda, it’s ludicrous that there is no energy labelling system in place for radiators. Of course, it’s important that we focus on insulation and the heat source, but if emitters aren’t included as the third piece of the efficiency puzzle then we risk undermining the performance of the system as a whole.

“We already have labels in place for boilers, heat pumps, micro CHP and hot water cylinders, so the introduction of a proper efficiency ratings system for radiators is well overdue. Our ‘Don’t Omit Emitters’ campaign is aiming to make this right. While the future remit of the ErP is unclear following the result of the EU referendum, it’s likely that product energy labelling will continue in some form in the UK. At QRL, we’re urging the government not to overlook radiators any longer – and we’re asking anyone who supports more affordable and efficient heating for all to sign our petition calling for change.”

In its Don’t Omit Emitters manifesto – outlined on the QRL website – the company argues that proper energy labelling would make it easier for people to identify high-efficiency emitters – ones that will improve heating system performance, cut costs and reduce emissions.

Mike Wright, product development manager at QRL Radiator Group, said: “Unfortunately, when it comes to radiators, outdated heating technology is the norm in the UK. As a result, inefficient emitters are costing homes and businesses thousands, while having a massive impact on our collective carbon footprint. The introduction of clear, recognisable and universal energy labels is the most effective way for the trade (and their customers) to confidently pit one product’s performance against another’s. To make this happen, it’s up to manufacturers to lead the way – but for the government to really sit up and take notice, we need the whole industry to rally together, sign the ‘Don’t Omit Emitters’ petition and make itself heard.”

For more information about the Don’t Omit Emitters campaign – and to sign the online petition – visit: qrl-radiators.com/petition.