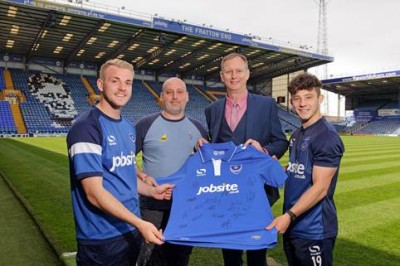 The signed shirt will be auctioned off to raise money for the Teenage Cancer Trust through the Portsmouth branch of City Plumbing Supplies.

UK heating manufacturer, Glow-worm, has come to the aid of Portsmouth Football Club after its boiler broke down, leaving the club with no heating or hot water for the players’ showers.

The company donated a 30kW Glow-worm Energy combination boiler paired with a Climapro wireless heating control, so that the heating and hot water can be adjusted from any point on site.

As a token of its gratitude, the club gave away three shirts: one signed by striker, Conor Chaplin; one signed by centre back, Jack Whatmough; and a final shirt signed by both players.

Gas engineers in the local area can get their hands on the shirt signed by Jack Whatmough through a sales promotion with Williams & Co Portsmouth.

Conor’s signed shirt will be given away through Glow-worm’s installer loyalty scheme, Club Energy, to the member who registers the most boilers throughout May – August.

The donation came about after Glow-worm was approached by Club Energy member and lifelong Pompey fan, Keith Hooper, at Pentland Plumbing.