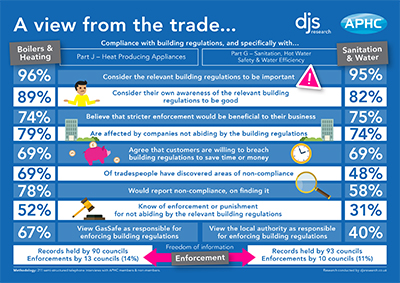 Shocking new, independent research findings from the Association of Plumbing and Heating Contractors (APHC) highlight the need for urgent improvements to the enforcement of Building Regulations in the plumbing and heating industry.

The independent research, which was carried out on behalf of APHC by consultancy DJS Research, was conducted in order to support the Association’s case about the need for improvements to enforcement procedures to government. It follows a series of summits held on the topic at Westminster, London, chaired by Lord Martin O’Neill and supported by key industry bodies, aiming specifically to gain an understanding of the current situation with regard to Building Regulations compliance in the plumbing and heating industry.

The initial phase of the research involved gathering information from local authorities across England and Wales under the Freedom of Information Act (FOI), posing three key questions around the numbers of breaches reported, numbers of prosecutions or enforcement actions and numbers of building control officers available to deal with notified work and enforcement actions related to Parts G and J of the Regulations. Out of the 359 city, borough and district councils contacted, a total of 250 responses were received. Although 193 local authorities provided at least some relevant information to the FOI request, only one council recorded a prosecution, with approximately a dozen councils recording enforcement actions over the last three years

The research process also involved conducting face-to-face interviews and quantitative semi-structured telephone interviews with both APHC members and non-members. Research findings highlight a worrying lack of awareness of Building Regulations among installers, with 52% of companies undertaking boilers and heating work and only 31% of those working on sanitation and water systems aware of punishment for not abiding by Building Regulations. Findings indicate that APHC members are much more likely to have heard of changes to Building Regulations – 94% compared to 84% of non-members in boilers and heating and 86% compared to 70% in sanitation and water. Results also reveal that companies undertaking work involving boilers and heating are significantly more likely to be aware of the sanctions or consequences of non-compliance than those working in the area of sanitation and water, suggesting that more needs to be done to influence perceptions of the importance of compliance in the latter area.

In light of the worrying new findings, APHC will be holding a fourth summit on Building Regulations enforcement in order to determine how the research can best be used to put forward solutions to the government for the improvement of enforcement procedures in the plumbing and heating industry.

John Thompson, chief executive at APHC, said: “The findings of our new independent research present some frankly shocking evidence of the need for reforms to the enforcement of Building Regulations in our industry. The contractors we surveyed reported encountering regulatory on-site breaches of work on an ongoing basis; set against this is the current low level of enforcement action taking place. The findings outlined from the research demonstrate that the current system does little to support the quality plumbing and heating contractor endeavouring to comply with legislation and safe working practices when competing for work. We look forward to moving this important project forward with our industry partner organisations by presenting our findings to government later in the year. From there we will be lobbying for the urgent need for change that will benefit the end consumer and which should also have the knock-on effect of improved trading conditions for quality plumbing and heating contractors.”