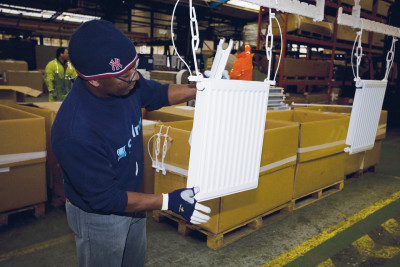 Stelrad is not all about making radiators, but fund raising too

Radiator manufacturer Stelrad’s Social and Charity Events Forum has announced that it has raised over £15,000 since it was formed back in 2011.

The 80 plus members of the Forum organise and attend a wide range of events and they chose the charities to be supported by their fund raising exploits – with the money raised being split equally between the national charity for injured servicemen and women, Help for Heroes and Blue Bell Wood Children’s Hospice locally in South Yorkshire – so far £7,622.30 each.

“This is a magnificent effort by the group and says a lot about the employees we have that they are so dedicated to ensuring that others benefit from the happy social events that they enjoy on a regular basis,” said Stelrad’s HR manager, Lisa Chambers.

“There were those who questioned if there was a place for a group like this when it was formed. Being within the work environment, with people so busy and involved in their own social lives, there were doubters, but the magnificent fund raising proves that there certainly is a place and a role for a work-based social group in 2016.”

The fund raising is just one of the charity support activities to come out of Stelrad, which also supports a number of other local charity fund raising appeals and in particular has ‘adopted’ the annual Montagu Cup Final football match in South Yorkshire which supports the Montagu Hospital Comforts Funds from the proceeds of the competition.

Stelrad sponsored this year’s Cup Final and the huge attendance and collections at the game raised around £2,500 for the charity.