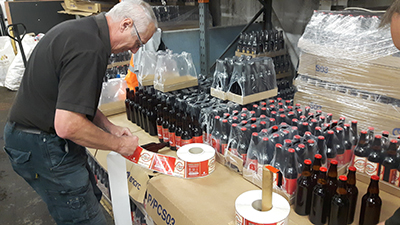 The Derventio brewery based in Derby, has created the Still Glowing Strong Pale Ale and Golden Bitter, which Club Energy installers are receiving through the post.

Glow-worm, one of the UK’s leading heating manufacturers, has launched a new campaign to celebrate its heritage and thank loyal Glow-worm installers for their ongoing support.

To demonstrate that it’s not just Glow-worm that’s Still Glowing Strong, the manufacturer is encouraging installers to get involved and share photographs of when they started in the industry to illustrate how they are part of the Glow-worm story – past, present and future. Installers can share their memories on Twitter using the #StillGlowingStrong hashtag, and also engage with competitions to win Still Glowing Strong beer, merchandise and other prizes.

Spencer Clark, sales director at Glow-worm, said: “We are a brand committed to innovation, and celebrating our Still Glowing Strong campaign is a reminder of our proud heritage and the ongoing support we provide to installers that keep us ‘Glowing Strong’.”

“For example as part of our commitment to one off installers, in 2016 we’ve already boosted our boiler range through four new exclusive merchant ranges to offer installers competitively priced products. This is backed up with our flexible extended warranty offer on Energy and Ultimate boilers, so that Club Energy installers have the most competitive ten- year warranty in the market.”